At work recently I was asked to be a part of a video that would be played at the annual Space Symposium, held in Boulder, Colorado. Many of us — younger, excited, aerospace engineers — took part and were interviewed. My interview for the video was a wide ranging thirty minute interview, much of which was left on the cutting room floor. The story the producer put together for the opening of the symposium was inspirational and spoke to our passions for space.

I trace my passion for space back to a poster I picked up at my dad’s work — an engineer at TRW’s Space Park in Redondo Beach, California; now Northrop Grumman. Here’s the story I told in the video about that day:

NASA used to have poster days downstairs and they would bring inspirational posters in to get people excited. And on one of the bring your kids to work days I came and walked home with an 8.5 x 11 poster that talked about what Olympics on the moon might look like. So it was an artists concept of an enclosed glass dome and I looked at that and said I want to build that moon base and that arena.

After the video came out, I dug through a box of my stuff to find that poster; I’ve kept it after all these years. If the artist, Pat Rawlings, signature on the image is correct, I picked that poster up in 1995. The poster was titled “The Lunar Games” and to this day still inspires me with its lofty dream. On the front of the poster, NASA wrote the following:

In the 21st century, will the Moon become a place where people live, learn, work, and play? With only 1/6 Earth’s gravity, imagine pole vaulting to incredible heights or new events such as human flight! 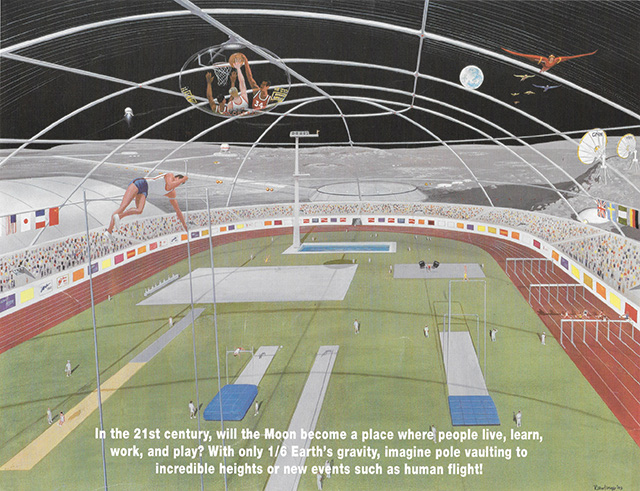 I’ve always wanted to share this poster and am glad to have this posted. I’ve included the full text from the back of the poster below as well as links to download different versions of the poster.

In the 21st century, the Moon will likely become one more place where people live, learn, work, and play.

As envisioned here, The Lunar Games could well reflect today’s athletic contests, but with only one-sixth the gravity of Earth, holders of “world records” would have to specify which world they mean! Imagine lunar pole vaulting records over 120 feet (37 meters), long jumps of 180 feet (55 meters), and weightlifting records of masses equivalent to 2,500 pounds (1,136 kg) on Earth.

New events, such as human flight depicted here, could very well be possible with the Moon’s reduced gravity, allowing athletes to propel themselves on a course within the pressurized dome of the stadium. Also, imagine the acrobatics when gymnasts remain “airborne” six times as long as they do now!

The stadium containing these events has a clear roof manufactured from lunar materials. The roof would keep out radiation while allowing an unobstructed view of the lunar landscape, quite a development challenge for future scientists and engineers.

Suspended from the top of the stadium, a holographic display shows highlights from the basketball game in the adjacent facility. Flags of participating countries line the stadium, and commercial advertisements cover the walls along the track. The event is broadcast to viewers on Earth through the large antennas outside.

Although many of the games’ attendees will be lunar inhabitants, spectators (and sports reporters!) will also travel from Earth. The terran visitors arrive on lunar shuttles (visible in the distance) and, after being transported to the terminal at the end of the stadium, can use underground shuttle tubes to reach subsurface hotels for check-in before attending the events.

Knowing that the Moon’s gravity is only one-sixth of the Earth’s gravity, how much would you weigh on the Moon? How far could you throw or kick a ball? How high could you jump? Follow the chart below .

In the future, as people start to inhabit other worlds, there will be several physical and social changes and problems to consider. Humans are very much accustomed to the Earth’s environment as we know it. Scientists have not yet found another planetary body that, in its current state, will sustain human life. As you look at the stadium, what steps have been taken to ensure life support for the humans? From what environmental hazards would humans have to protect themselves?

How have humans adapted to inhospitable environments on the Earth? Compare and contrast measures humans will have to take to protect themselves on the Moon or on other bodies in our Solar System with what has been done here on Earth at the polar regions, in the deserts, and under the sea.

Pat Rawlings produces space art reflecting robotic and human missions of planetary exploration, as well as visions of the eventual development of space.